Iptables Linux firewall is used to monitor incoming and outgoing traffic to a computer and filter it based on user-defined rules to prevent anyone from accessing the computer or IP masqueraded devices. Using iptables you can define rules which will allow only selective traffic on your computer or the router itself.

What You Will Need

Before you begin with Iptables tutorial, you will need the following:

All data is sent in the form packets over the internet. Linux kernel provides an interface to filter both incoming and outgoing traffic packets using tables of packet filters. Iptables is a command line application and a Linux firewall that you can use to set-up, maintain and inspect these tables. Multiple tables can be defined. Each table can contain multiple chains. A chain is nothing but a set of rules. Each rule defines what to do with the packet if it matches with that packet. When the packet is matched, it is given a TARGET. A target can be another chain to match with or one of the following special values: 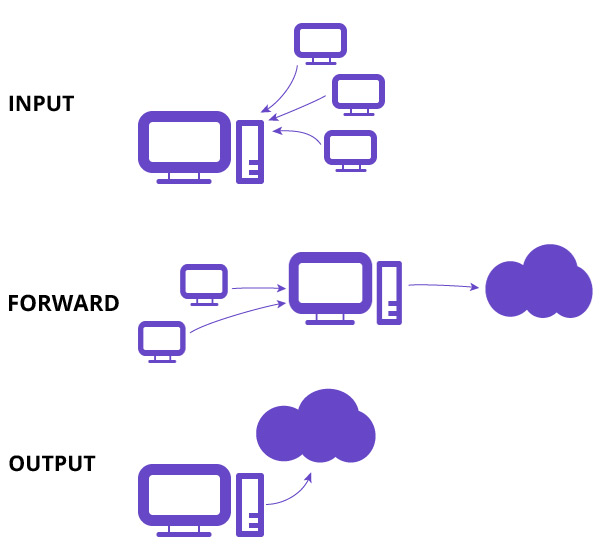 The Only Few Commands You Will Ever Need

These rules are copy and paste. Simply paste them at the Qortal terminal via SSH and save.

Block outgoing port: /sbin/iptables -A OUTPUT -p tcp –dport {PORT-NUMBER-HERE} -j DROP. For example, you want to block telnet port 21 then put 21 after –dport. It will be /sbin/iptables -A OUTPUT -p tcp –dport 21 -j DROP . Similary, if you wish to block a DNS then it's port 53. Look at common used ports by services on Wikipedia https://en.wikipedia.org/wiki/List_of_TCP_and_UDP_port_numbers

Block incoming port: /sbin/iptables -A INPUT -p tcp –destination-port {PORT-NUMBER-HERE} -j DROP. It works same as outgoing port syntax. Simply enter port numbers of running services you do not want accessed outside your network. If you wish to allow only a particular IP on any port or service then use -s IP_Address after DROP

It is fairly simple to view what is happening on the router. The pre-installed utility "tcpdump" does all that in a human readable view. The Qortal Router comes ready with either your own recursive DNS or a DNS forwarded and to monitor all your DNS lookups, you simple paste this command in terminal:

Note that port 53 is used for DNS queries. If you want to see the web site traffic, replace it with port 80.

The Qortal Router comes ready with your own Tor dedicated gateway. You can use it for all types of internet traffic on the router itself and on connected devices such as browsers, QT wallets, Torrents for safety and privacy which is a big deal these days.