This update includes MASSIVE changes on both the UI and Core. There are some considerations to keep in mind.

The UI MUST be updated FIRST, before the core, or the older UI versions will STOP FUNCTIONING upon 3.0 release. This is for multiple reasons. The new core requires an API key to be used for 'sensitive' API calls, and the older UI did not use this method. Also, the 3.0 version after QDN transaction 'go live' timestamp, will change the default transaction version from 4 to 5, and the older UI versions do not have the ability to create that new transaction type. Therefore updating to 1.7.0 UI FIRST is required in order to keep functionality.

Windows and Mac users who are already on version 1.6.3 of the Qortal UI, will automatically update and will not have to do anything to update their UI.

update applying to MAC USERS - the previous statement about mac automatically updating may not be the case for everyone. If your mac does not auto-update to version 1.7.0 simply DOWNLOAD THE NEW VERSION from https://qortal.org/downloads - download the new .dmg, mount the image, then drag n drop to applications and overwrite the existing version. Then you will be good to go.

The core will DEFINITELY auto-update for EVERYONE, unless they have that specifically disabled.

Updating the UI for Linux and Pi users

In order to SWITCH to using the .appimage file, you simply download the .appimage for your architecture (you can RENAME the file to something like 'Qortal-UI' if you like, so it looks nicer.) Right click the file and go to properties, under the properties window, there is a permissions tab, click that tab, then check executable for your user.

Pi users - We now have an .appimage compatible with both arm and arm64. This will allow pi users to not have to build from source anymore, and will auto-update like every other UI version. Same exact instructions for Linux users as far as changing to the new .appimage. Simply download the file (rename it if you like, something like 'Qortal-UI' makes the most sense). Right click the file and go to properties, on the properties window there is a permissions tab, on that tab check the 'execute' box for 'owner' (see image below) then you can simply double-click and RUN the appimage, no longer needing to build from source. 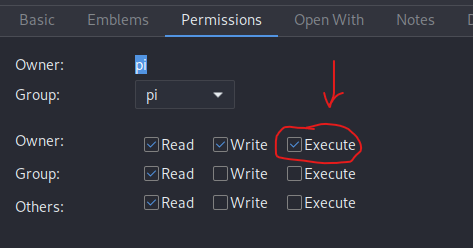 For the older QORTectors that are running the Plumbus image the setting will look like the image below. Still right click the file, properties, then go to permissions and check the allow executing this file as a program checkbox. (see image below) 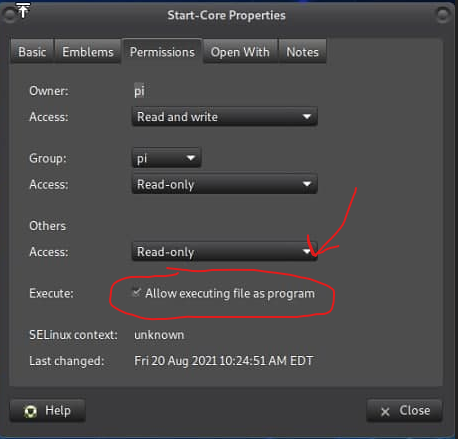 When using the appimage you NO LONGER NEED the previous start script that you used to use to start the UI, you can REMOVE that start script.

(This is mostly for QORTector users, or anyone who setup their system in a similar fashion, with the Start-Qortal-UI-Electron.sh script that I wrote. That script, as well as the update script, are no longer needed if you use the new appimage. The appimage is literally an image of the Qortal UI application, it is the ONLY file you need. Simply make it executable and run it, you no longer need the from source build stuff, start script, etc.)

To re-iterate and avoid confusion - You do NOT need the previous 'Start-Qortal-UI.sh' script anymore, and you do not need the 'yarn run server' done in the terminal anymore, IF you are SWITCHING to using the .appimage version.

You run the appimage file directly, after making it executable.

If you would like to attach the Qortal UI icon to the file, simply right click the appimage file and go to properties, then click the icon (see picture below) and it will ask you to browse for a file. The Qortal UI icon file is located in

folder, and is an .ico file, simply select that file and click OK. Then the appimage file will have the Qortal UI icon as well.

Version 1.7.0 of the Qortal UI includes 2 new plugins aimed at QDN functionality. These new plugins are called 'WEBSITES' and 'DATA MANAGEMENT'. Both of these new plugins will NOT FUNCTION UNTIL AFTER THE 'GO LIVE' TIMESTAMP. The 'go live' timestamp will be set upon the release of 3.0, and announced thereafter.

Once you have your UI updated, version 3.0 of the core update will work with your UI. The 3.0 core version will auto-update from 2.1.3 without any added effort. The only thing that you will need to modify, if you're a Linux or Mac user is the stop script (stop.sh). The current stop script does NOT use the API key for the calling of the admin/stop call, and therefore will NOT function. There will be a new stop script launched upon 3.0 launch. You will simply need to download the new stop script and replace the existing one.

Version 3.0 update will include the new back-end functionality for QDN (Qortal Data Network), however, the functionality will not START WORKING, until AFTER the 'go live' timestamp for the QDN transaction switch.

We will make an announcement when this timestamp has been set, to let everyone know EXACTLY WHEN the new QDN transactions (data publishing, website publishing, etc.) will be able to start taking place.

This is by far the biggest update in Qortal history, and includes some of the MOST AWAITED features of The Qortal Network. We sincerely hope you enjoy building the INTERNET OF THE NEW WORLD with Qortal!

Updating the Stop script for Mac and Linux