The process of becoming a minter has been slightly modified from its original concept:

In order to become a minter on the Qortal Network, a user will need to be 'sponsored' by a founder or level 5+ minting account (if you did not purchase a QORTector device before launch of Genesis or are not a QORA Forger you’ll require a sponsor).

As the required number of blocks go by, the people in 'reward share' situations are checked for 'online status' where they issue a timestamp that is verified by other members on the network in 5 min intervals.

All users in the reward shares will be counted as online. Initially, the newly sponsored account will be a level 0, with a reward share key provided by a sponsor. The sponsor's reward share key is added to the sponsee's node and will process the first 7200 'online blocks' without any block reward in order to become level 1.

Please note: Sponsors do not earn anything for sponsoring others. Sponsors do not earn additional block rewards nor additional blocks minted count. The sponsee does not earn any block reward during the level 0 period of minting 7200 blocks to reach level 1. This is simply the time for the sponsee to prove oneself to the network and become a level 1 minter. The 7200 blocks are credited to the sponsee permanently in the ‘Total Blocks Minted’ record.

Once a user has ran a node for 7200 blocks and the account becomes Level 1, the user can then generate his/her own reward share at which point they are enabled (officially a minter on the network) and are able to obtain their shared portion of the block reward (refer to Block Rewards & Distribution to learn more about the rewards system).

It is highly encouraged to study the content on the wiki prior to seeking sponsorship. We often see people requesting sponsorship without having done any research and it’s important to note:

How To Enable Sponsorship

In order to become a Minter, you must first become 'sponsored' as described above. First, you will need to have your node setup with the Qortal core and UI installed and fully synced. Remember, the core must always be running while the UI only needs to be open when you want to use it. Next, you'll need to setup an account. Refer to Account Setup & Recovery wiki page on how to do this.

To be sponsored, you'll need to speak with the community and find a level 5+ person willing to sponsor. The best way to do this is to introduce yourself and become active in Q-Chat, Telegram or Discord. See Official Links wiki page for the links.

The level 5+ sponsor goes to 'Reward share' in the Qortal UI and issues a 0% reward share transaction with the recipient's Public Key (PUBLIC KEY not address)! You can find this with the gear icon in the top right corner of the UI screen.

Now… THERE ARE 2 WAYS that a sponsorship relationship can work…

1. The sponsor runs the sponsorship timeframe FOR the sponsee. In this case the sponsor would apply the key to his/her node, and run it for 7200 online blocks. At which point the sponsee becomes level 1, can create their own key, and assign it to 'Node management'.

2. The sponsee runs the sponsorship timeframe (this is the most common method). In this case the sponsor will give the key to the sponsee. Then the sponsee assigns the sponsor’s reward share key to their node and runs for the 7200 block timeframe. You have to be online for 7200 blocks, so if you turn off your node, you will NOT get credit for blocks passed while your node was offline. The whole point of minting is to be ONLINE. The sponsee adds this Reward Share Key to Node Management by selecting ‘Add Minting Account’. You will then see a confirmation of ‘Minting Account Added Successfully’. Here is a walkthrough video: https://youtu.be/L3WFYg55foA

Here is a walkthrough with screenshots:

1. Click on the gear icon in the top right corner of the UI. Copy your public key (not your address) and send it to your sponsor:

2. Copy the reward share key (minting key) your sponsor sent you. Now go to 'NODE MANAGEMENT' in the UI and click on 'Add Minting Account' in the top right corner: 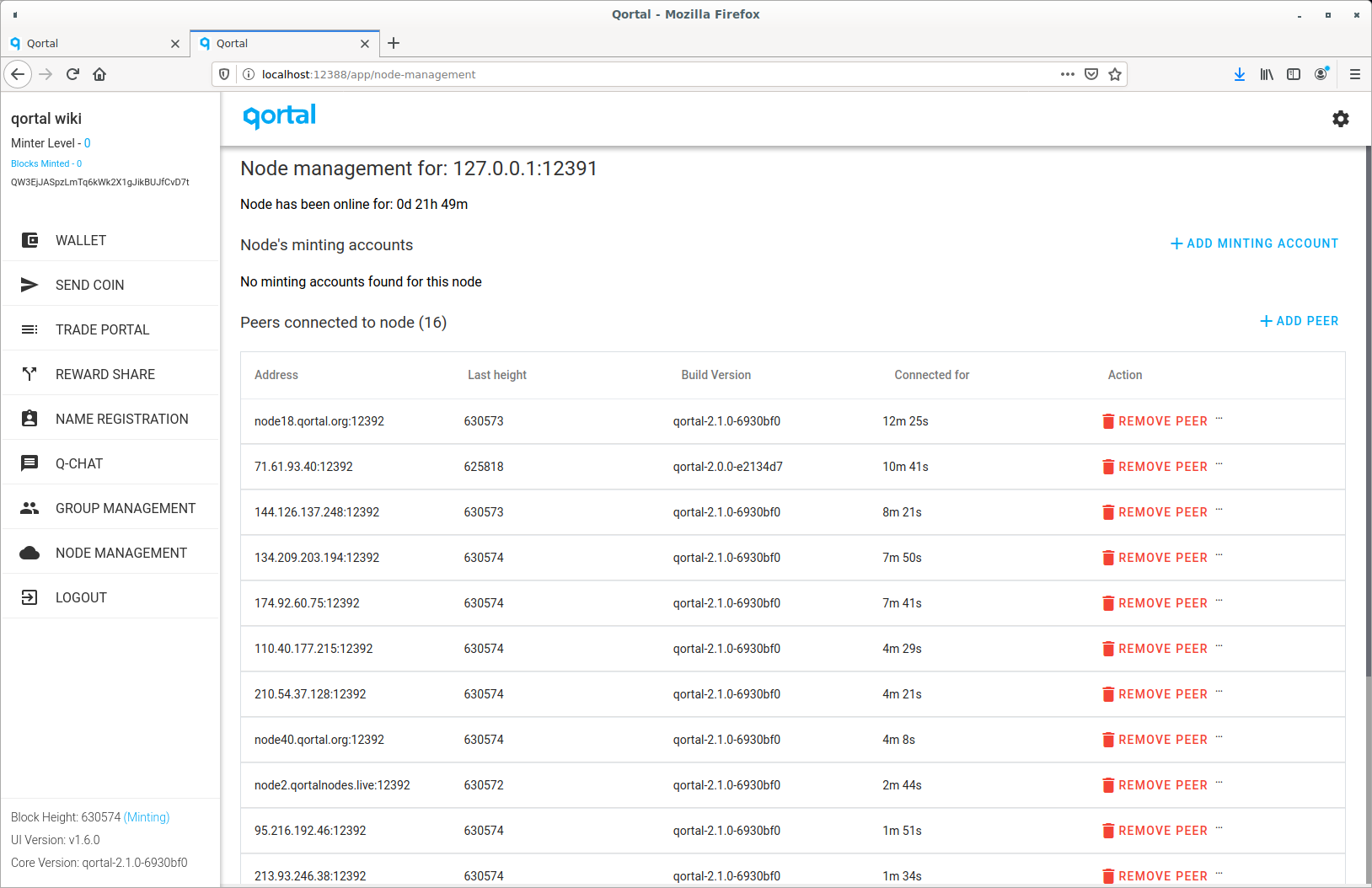 3. Paste the minting key in the 'Rewardshare key' field in the popup window, then click 'ADD': 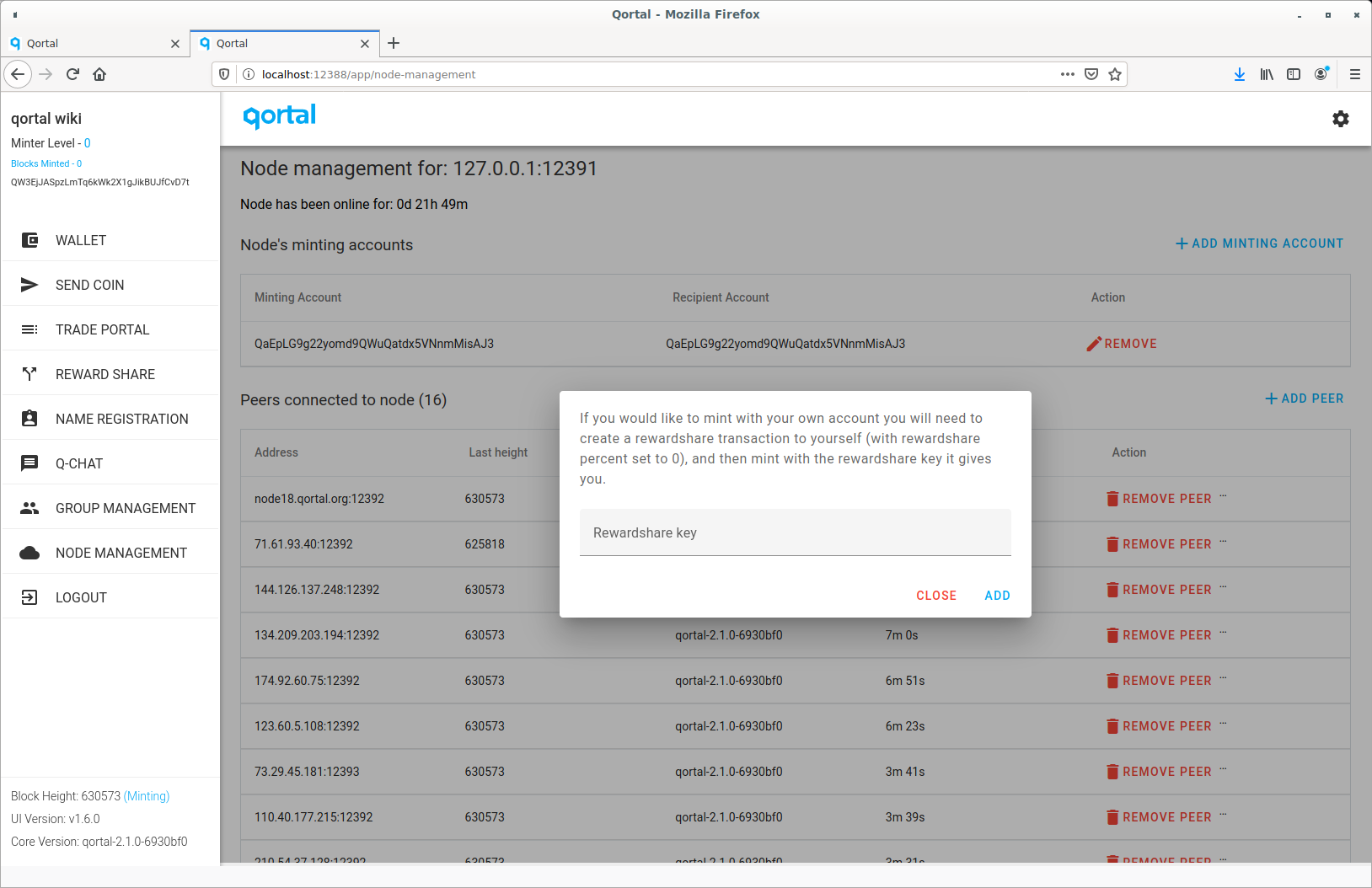 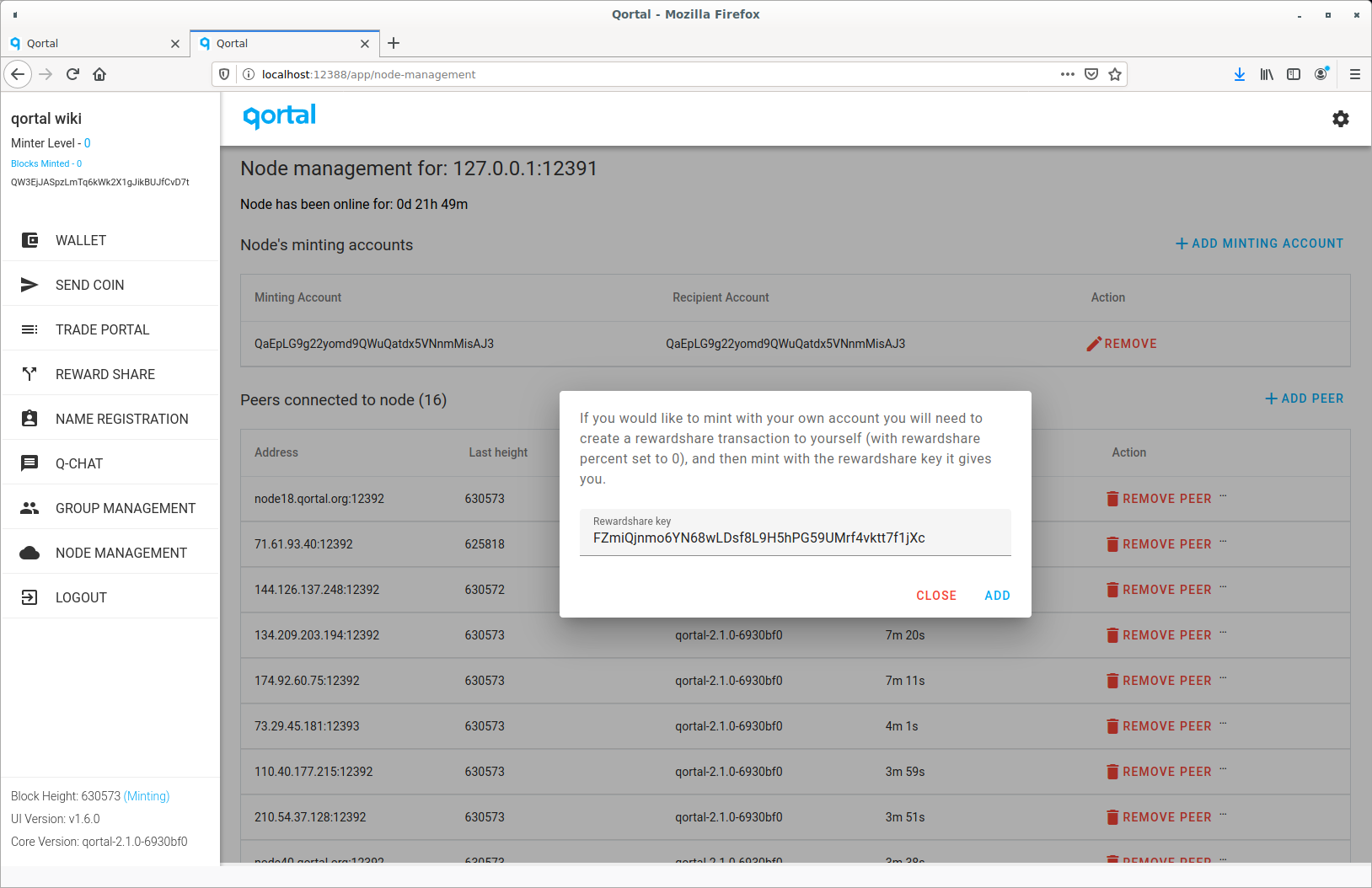 4. It will then display 'Minting Node Added Successfully!' after a moment. Then you can click 'CLOSE': 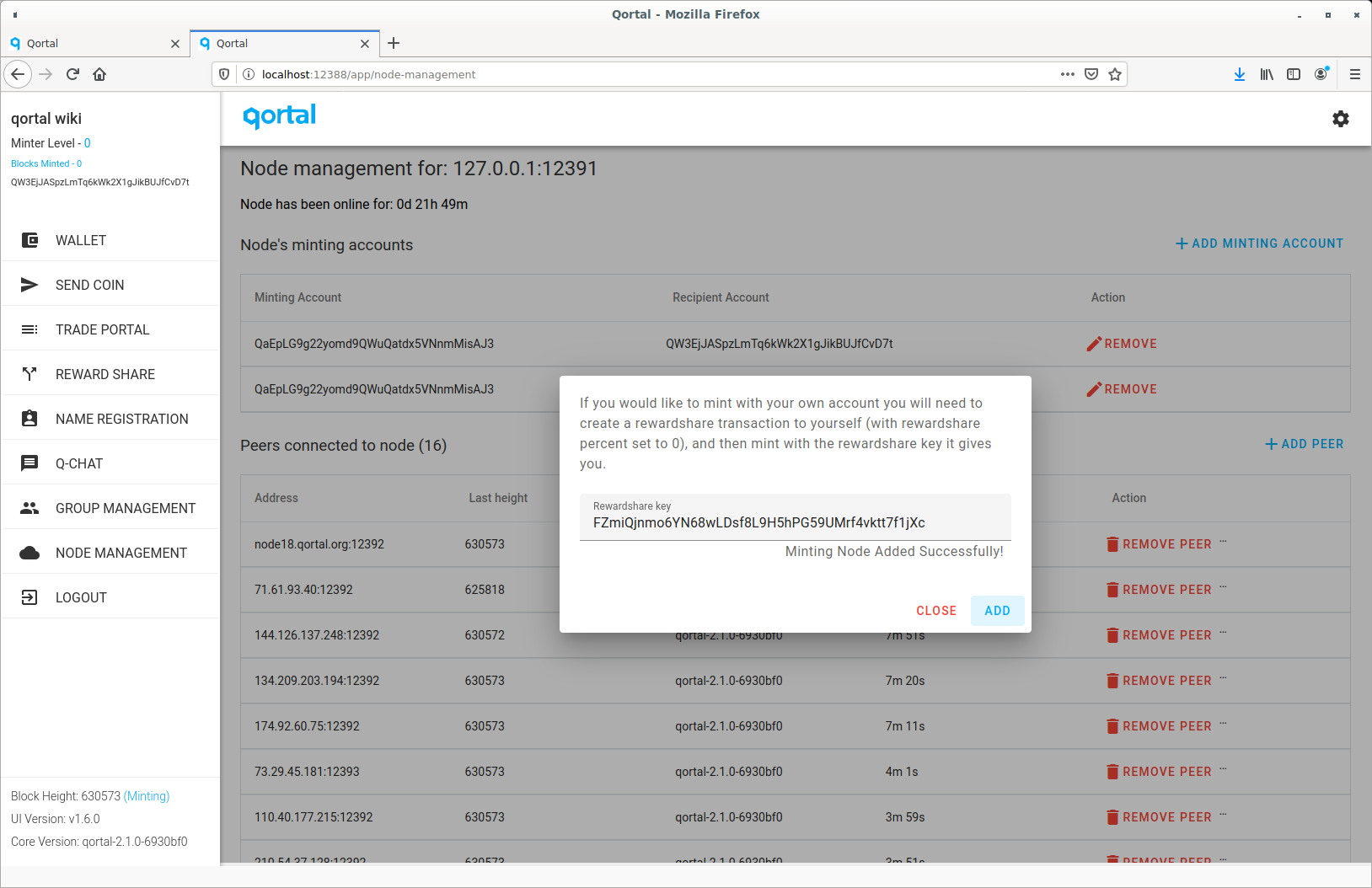 5. Congrats! You should now see '(Minting)' next to the block height in the lower left corner of the screen. Remember, it takes 7200 blocks minted during this level 0 period to reach level 1. You do not earn any QORT during level 0 and you will not earn any QORT after reaching level 1 until you create your own reward share then add to Node Management.

After 7200 blocks and reaching level 1, you will see your account level in top left corner of the UI reflect your new level. You will now need to create a ‘self share’ or 'minting key' with the use of your own public key::

2. Click on ‘NODE MANAGEMENT’ in the left navigation column. 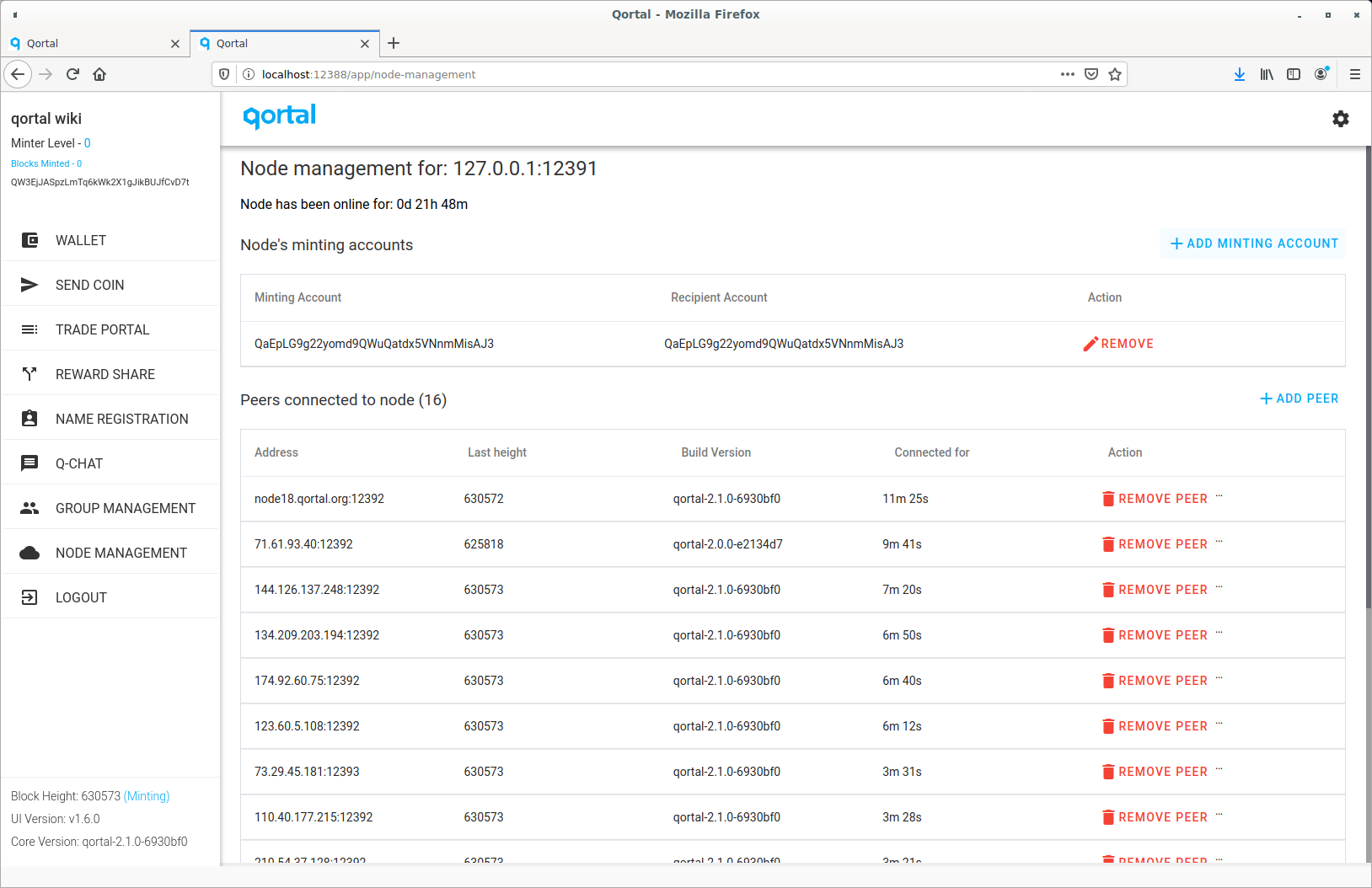 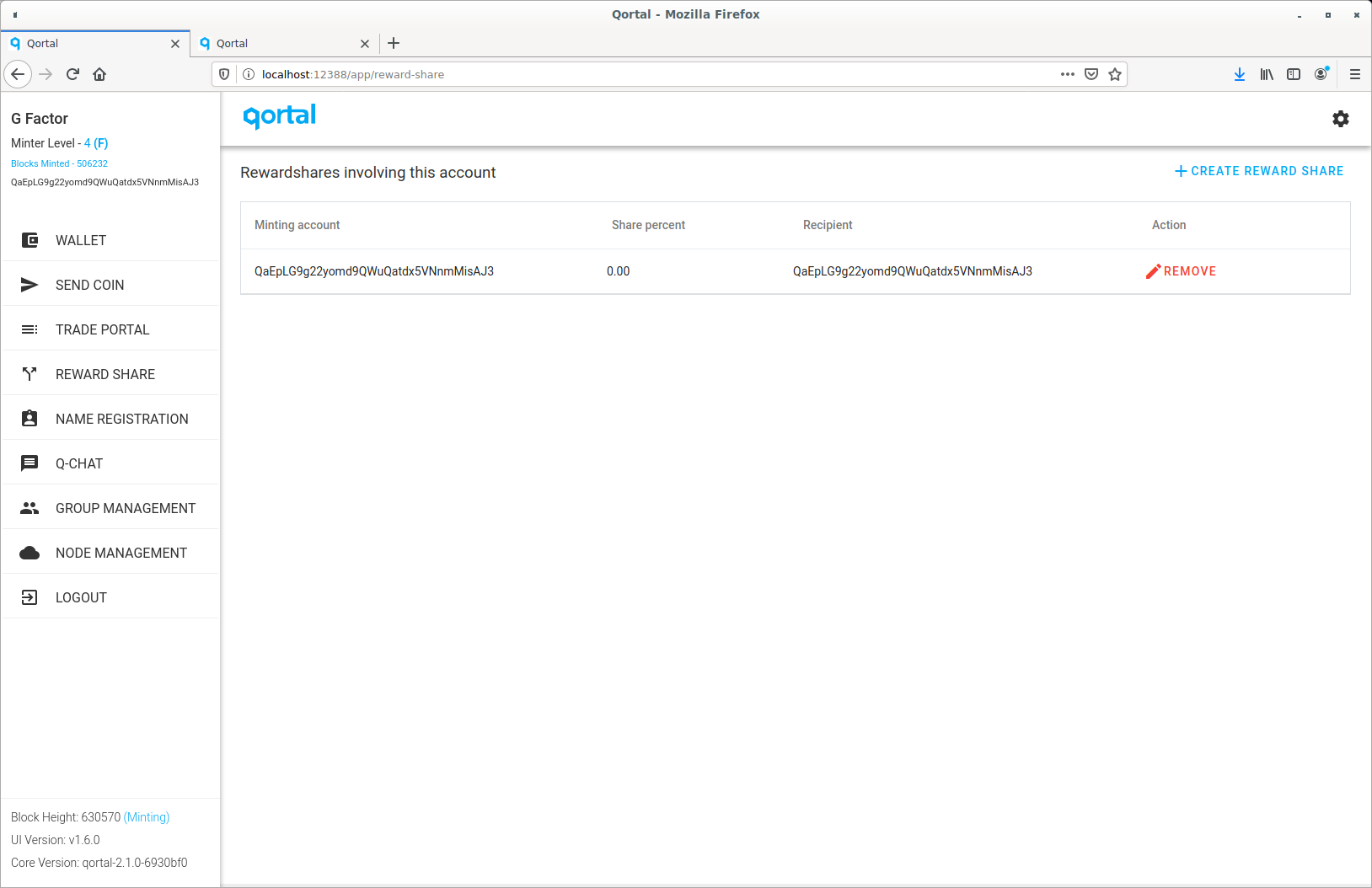 5. Click the settings toggle at the top right of the UI, and copy your public key (not your address).

6. Click ‘Create New Reward Share’ right underneath the settings Toggle at the top right of the UI: 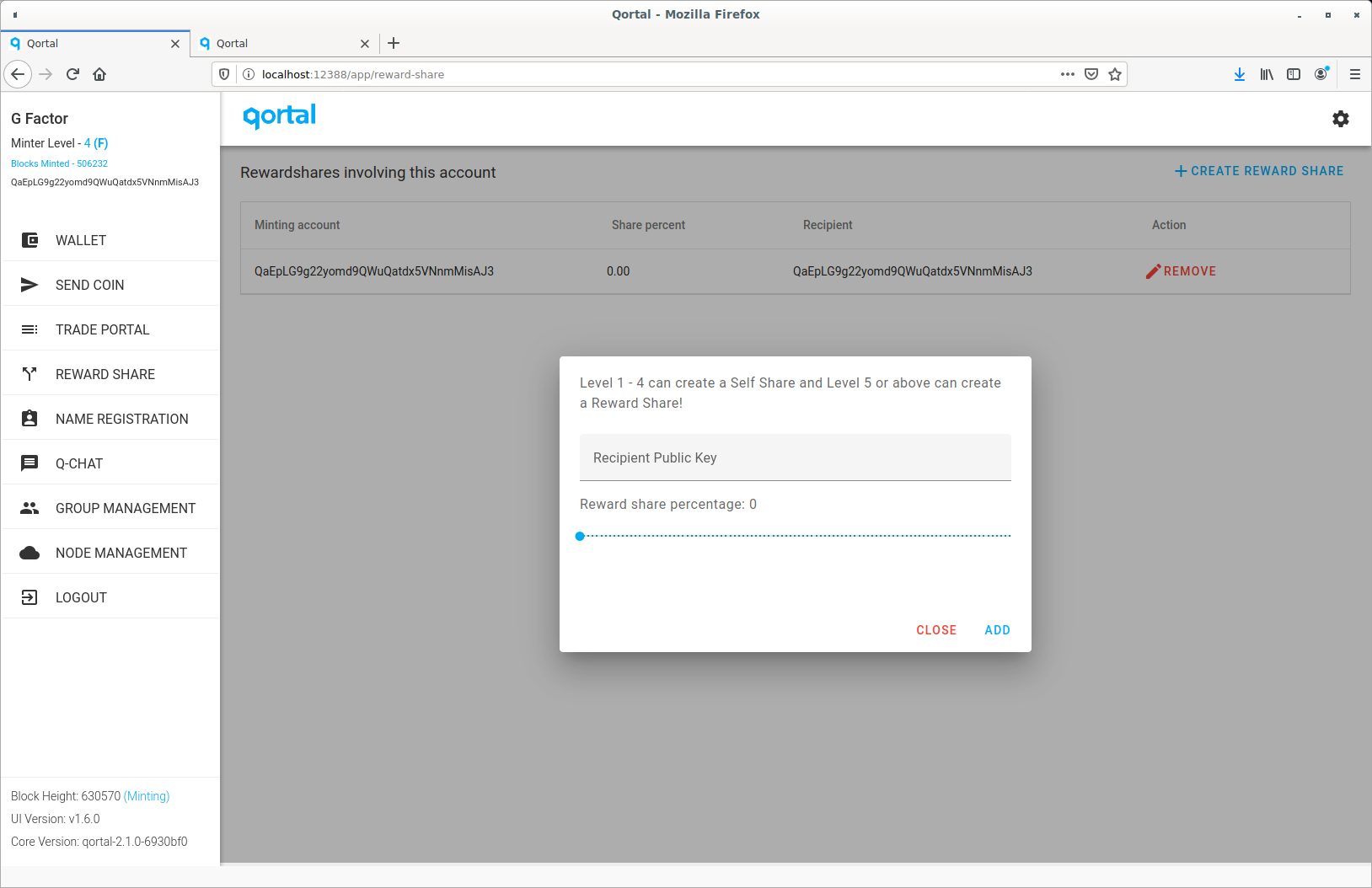 7. Paste your public key into the box that comes up, do not change anything else, click ‘ADD’: 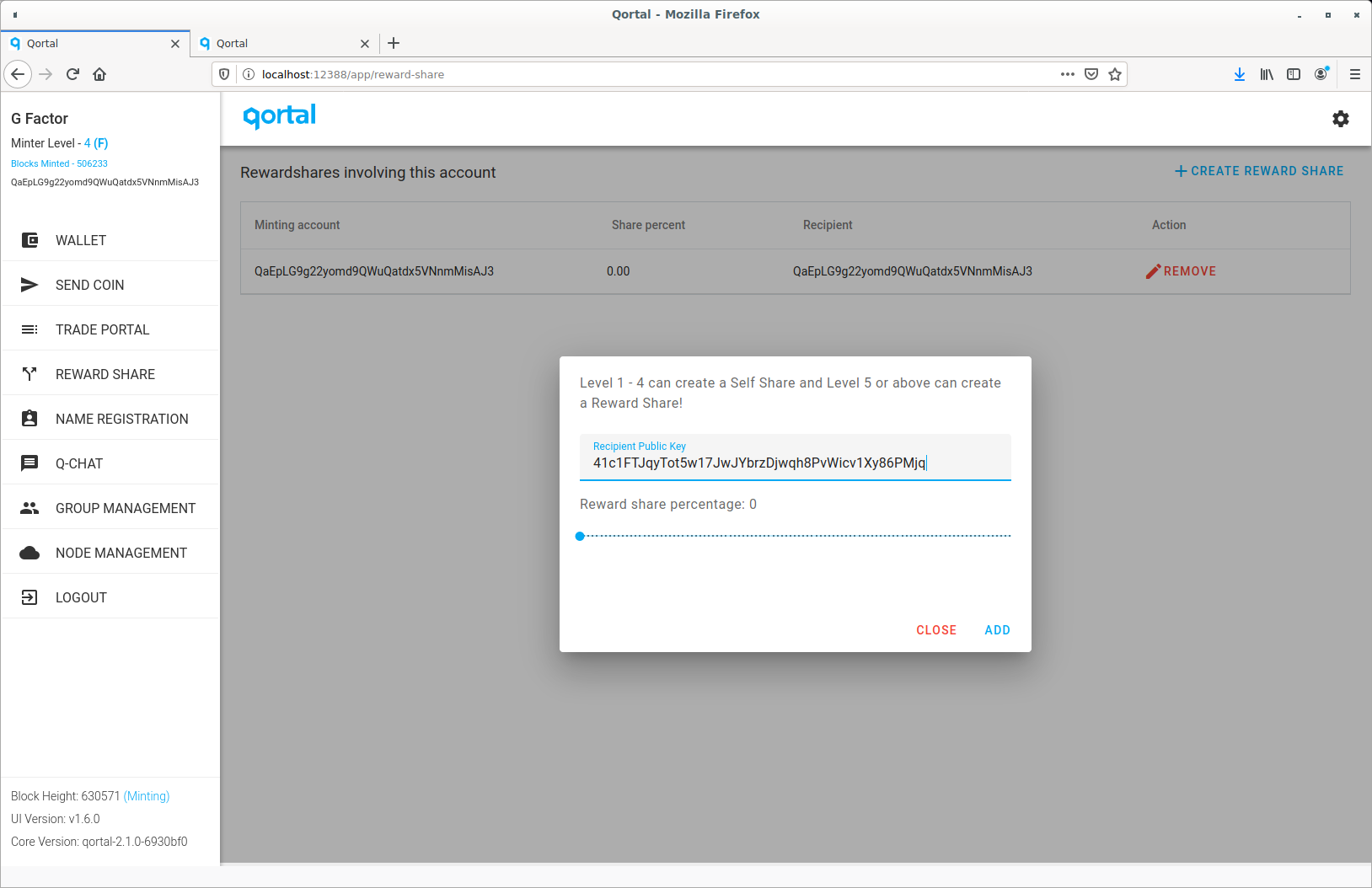 8. A new window will pop up with a new key, right click on it and copy that key before completing this step. This is your minting key (as seen in first image below). Click 'CONFIRM'. A message saying “Reward Share Successful!” will be displayed (as seen in second image below): 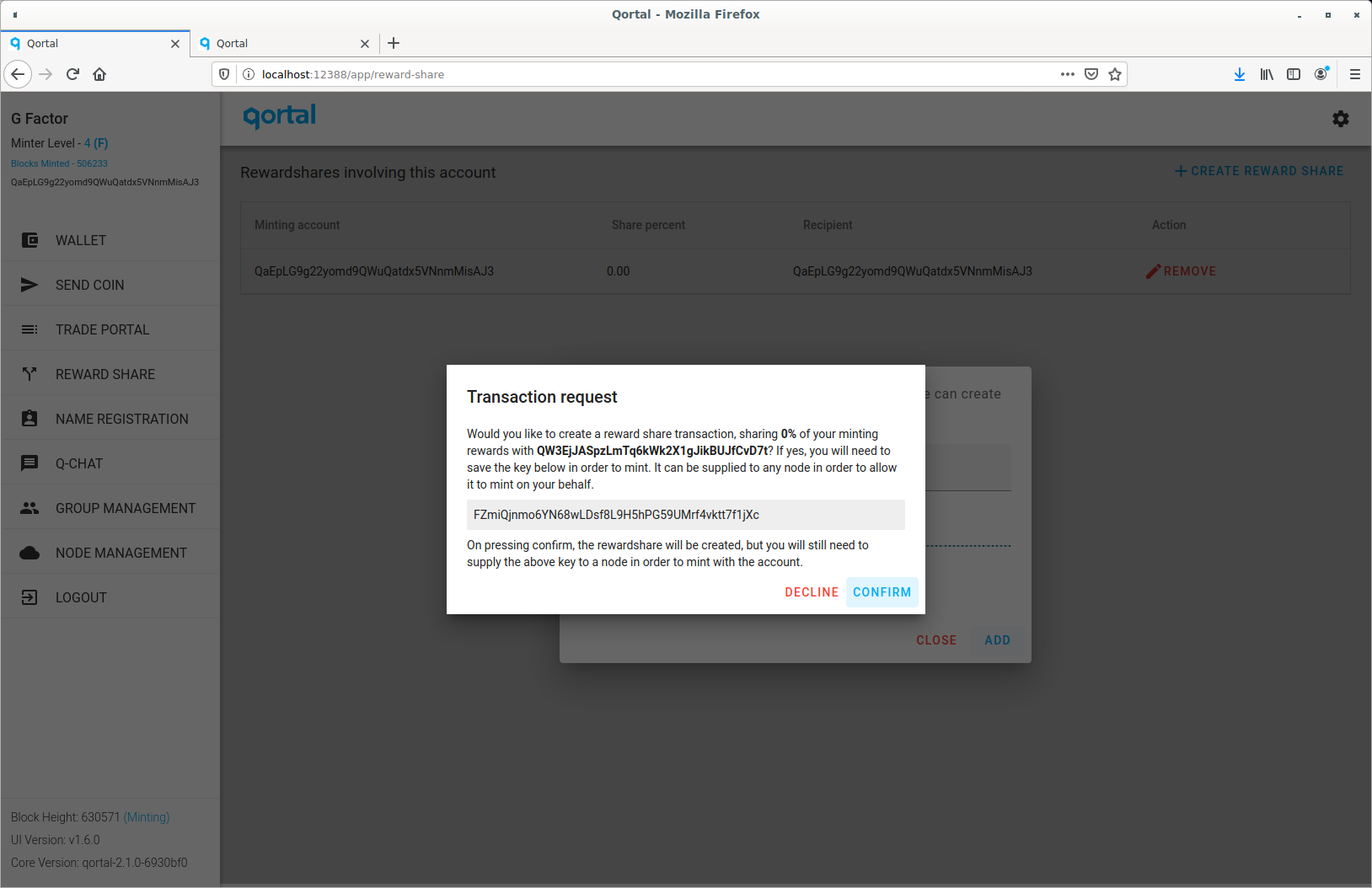 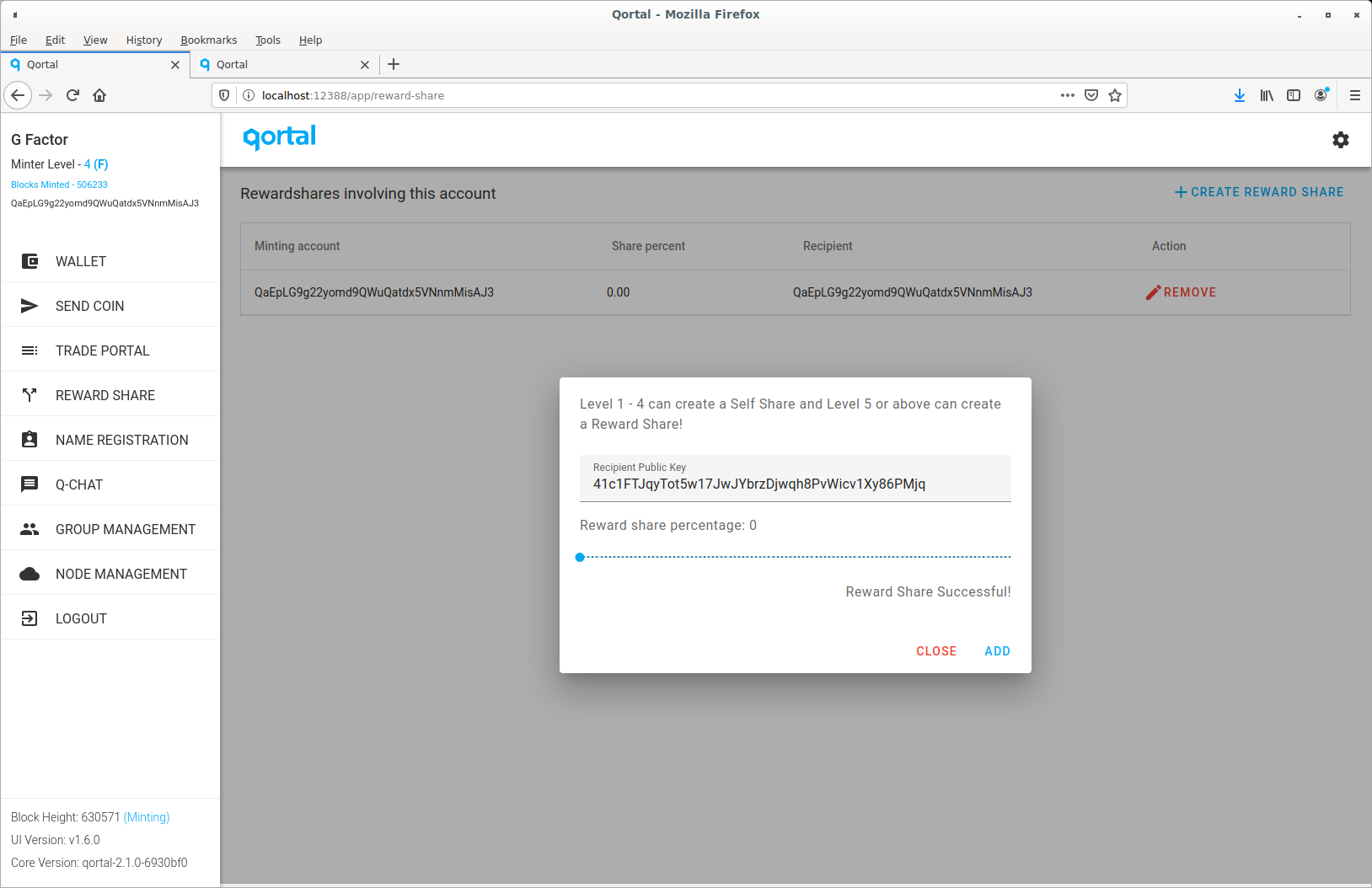 9. Wait a minute or so for at least one block to be processed on-chain (which has your Reward Share Key transaction). Then click on 'Node Management' on the left navigation column.

11. Right-click to paste the key - you can also paste by 'Cntrl' and 'V' keys. Click add. You should see “Minting Node Added Successfully!” (as seen in third image below). If not, it is because you have not yet removed the previous Minting Account as instructed in Step 3 of this guide:

Here is a single image guide for the steps above: 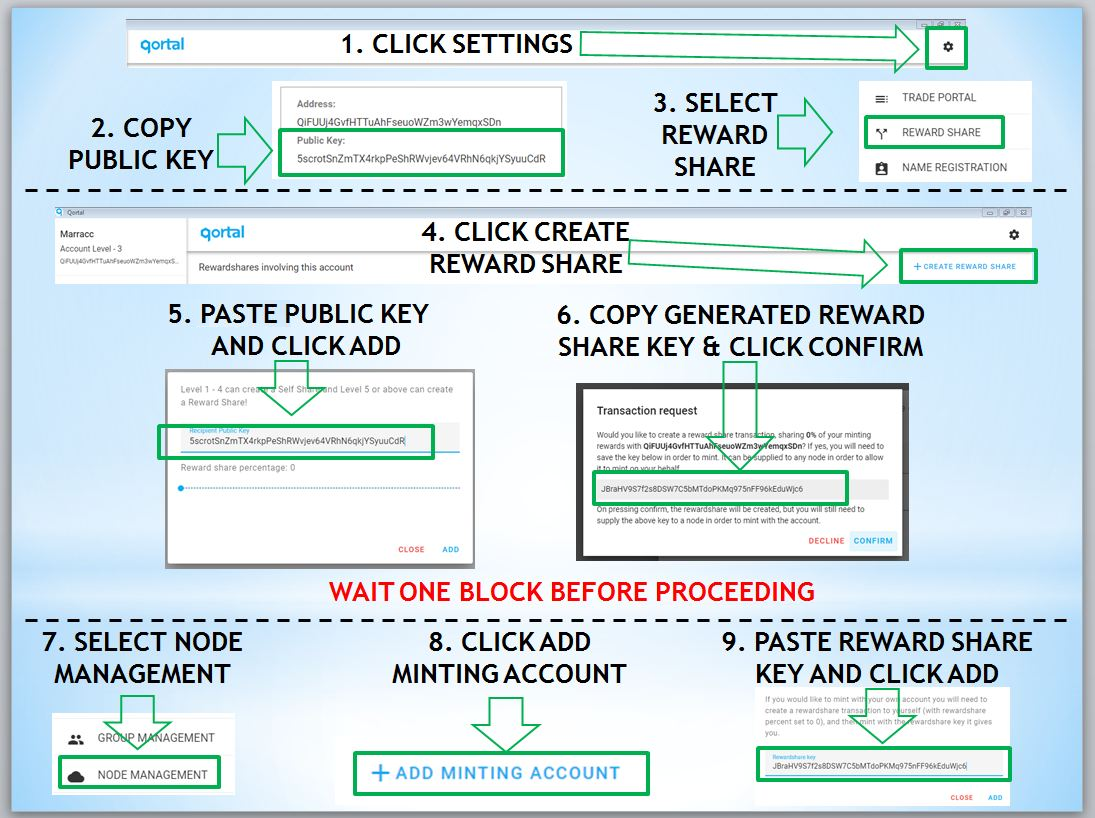 The sponsee does not have to wait for the sponsor to remove things on their end. The sponsee can begin these steps all on their own. Of course as a general courtesy, it is still nice to inform your sponsor of your account reaching 7200 blocks and you successfully setting up your own key to mint! That’s it! Congrats!

Remember: There is a 1 block confirmation period between creation of the key, from the point you can assign it, as it has to first be confirmed so the API can verify it. So be sure to wait at least 1 full minute (or notice block height and wait for next block after key creation) before attempting to assign the key… otherwise the assignment will fail as the chain is not aware of the created key.